Serving the Greater Northwest since 1972

Alaska has been called America's Last Frontier not only because there are still thousands of acres of land that have yet to have man set foot on, but the everyday life that people in the lower 48 states take for granted, is a constant struggle in the backcountry of Alaska. Every job in Alaska can be an adventure into the unknown and our firm has been lucky enough to have experienced some of these adventures and the following are one of those adventures.

Juneau Alaska Power & Avalanches
Snettisham Hydroelectric
Project The Federal Government's Snettisham Hydroelectric Project came online on December 1, 1973, offering 47.2 MW of electrical power to the Juneau power grid. Its hydroelectric potential had been discovered early in this century by people exploring for minerals and timber south of Juneau across Taku Inlet. With the growth of Juneau and the forecasted need for more capacity, detailed feasibility studies concerning the development of Snettisham as a hydroelectric project were commissioned and conducted in the 1950s. Based on favorable reports, the construction of the project was authorized by Congress in 1962, and the actual construction of the project began in 1967.

Upon completion, the plant was put online. The 44-mile-long transmission line, however, followed a route over Salisbury Ridge to reach Juneau. The Snettisham line suffered frequent problems due to high winds as it crossed over Salisbury Ridge, and, as a consequence, the supply of power from Snettisham to Juneau was frequently interrupted for long periods during the first two years of its operation. With constant outages and frustrated customers, the Alaska Power Administration, the Federal agency in charge of the project, decided to move parts of the transmission line to reduce the line failures. Through the Corps of Engineers, the work was contracted out and the line relocation was completed in September 1976.

The Snettisham Project was designed to provide the Juneau power grid with plentiful power for the long term. Snettisham's power plant and generating facility is at sea level and in the mountain itself, with other supporting buildings and shed's outside the portals. Water from the generators helps support the Snettisham Fish Hatchery which is run year 'round by the State. In addition to Snettisham's Long and Crater Lakes, there are other nearby projects that are available for development when additional energy is needed by Juneau. These projects have a projected service life of at least 100 years, making hydropower a continued part of life in Juneau for many years to come.

Outage History due to Tower damage
Since the 1976 relocation, the Snettisham project has had a respectable performance record, considering the extremely difficult terrain and the many angles and dead ends (41% versus a more typical 20%). The records of major damage can be summarized as:

Several initial wind problems on Salisbury Ridge - The line section was relocated off of the ridge in 1976 and there have been no recurring problems.

Avalanche on January 2009 destroyed Tower 3/5 - The tower was eliminated with a long span across the canyon. From the summer of 1976 (after Salisbury Ridge relocation) to the present, there were no major outages to the line until 2008 and then a repeat in 2009. Without counting minor outages, this 34-year performance is very good considering the avalanche and landslide potential along the line route.

Our firm took part in the Design and relocation of 2400 feet of power line, removal of Tower 4/7 the relocation of Tower 4/6, redesign and raise tower 4/5 and the design and installation of snow legs on Towers 4/5 and 4/6 for protection from avalanches. We teamed with A&J Construction out of Homedale Idaho to bid this project and were the successful bidders. The project consisted of Topographic survey of the 2400 feet of line for the design phase, design of the new towers to be installed and snow legs and the reconstruction of the towers and line. To get this project underway, myself, Albert Gaschler and Curt Gaschler flew to Alaska to perform the topographic survey needed for the design and relocation of the line. We hired a local helicopter firm out of Juneau to fly us out to the site and drop us off at one of the existing log helicopter pads constructed for inspections of the lines, this is where we made base camp for the next 10 days, which consisted of only two pup tents.

As the Helicopter flew away with the pilot saying see you in 10 days, reality set in that for the next 10 days we were stranded on this hillside with no way off, but the thrill and adventure of being in the Last Great Frontier was more than enough of an adrenaline rush to keep me from even giving it a second thought.

The hillside that we were on consisted of 60% plus slopes and the only semi-flat area for our camp was at the base of the Helicopter pad, so we pitched our tents in this very small area. So far we were lucky to have arrived with a few days of sunny weather (this was the last we would see of the sun for the rest of the trip). After setting up the tents we proceeded to build a fire for the evening so we could cook our dinner. Ya right, what little bit of wood that was around, was like a sponge, you had to bear hug it to squeeze as much water out of it as you could, to have any chance at all of it burning. After about an hour of trying to get a fire to start with nothing but wet wood and using our valuable toilet paper, (which is like gold in the backcountry) we thought we were going to have to live the 10 days being wet, cold and worse of all, cold food!

Being that the sun was out, so were the bugs (mosquitoes and those every vicious no see-ums) there were billions, not millions, but billions!! Albert and Curt had been putting on their store-bought bug sprays, but it seemed like it was more of an attractant than a repellant. Luckily I had bought several bottles of army surplus bug repellant at an army surplus store before heading to Alaska, knowing that it worked on almost any kind of bug, so we gave this repellant a try.

After putting it on, it worked to keep the bugs at bay! Albert asked what was in it compared to the store-bought stuff that made it work so well. In reading the label I noticed that among other things, I didn't have a clue what the chemicals were but noticed that it was around 90% alcohol! Which gave me an idea, I poured some of it on the wood in the fire pit and then put a match to it, it started burning and in order to keep it burning I kept spraying small amounts on it to keep it going then the wood took hold and it kept burning on its own. Knowing we did not have enough of this repellant to start a new fire every day we kept the fire burning 24/7.

After getting the fire going, I took off to look at the line to formulate a plan of attack on this job while Albert and Curt started preparing some dinner. As I mentioned the first couple of days in Alaska and the day we landed on the mountain it had been sunny with a few clouds but no rain, (which we found out later had been the first couple of days of sun for months) so after a semi-warm meal we turned in for the evening (around 1 am). At about 3 am, I awake to a wet cold feeling and found that we had about six inches of water running through our tent. Being there are only about 4 to 6 inches of mulch setting on top of solid granite rock, when it rains the whole countryside turns into water falls including right through the middle of the only area we had to camp. So for the next 10 days we spent every night sleeping in wet bags as there was no way of drying them out completely during the day as it seldom ever quit raining.

We had planned on it taking ten days to complete the job, but since there was nothing else to do but set around a smokey fire in the rain, we worked 14 to 16-hour days, this got our surveying done in 6 days and was wishing we had some way to contact the Helicopter Pilot to come and get us. By this time, the weather had gotten really bad, and the cloud cover was hanging several hundred feet below us, making it pretty much impossible for them to get us, but we were sure wishing we could contact him.

As we were sitting around the campfire hoping that since the weather was turning bad, they would come to check on us. About this time I heard a helicopter so I turned on the CB radio they had given us to talk to them when they were close enough and sure enough it was our pilot coming to try and get us off the mountain. The weather report was not good and this was his last chance to get us. The pilot radioed that we were coming off, done or not, or we would be there for weeks. I said get us out of here. Easier said than done, as I said the cloud cover was thick as soup. After talking with the pilot he told us that he was going on over to the power plant (about 5 miles away) and set down on the runway there giving us about 30 minutes to tear down camp and be ready to go when he came back. We quickly tore down the tents and stuffed everything into our duffle bags and then proceeded to find enough wood to build the fire up hoping he would be able to see the fire to help him land since you could not see more than 10 to 20 feet above us.

Upon his return I used the radio to talk him in by the sounds of his helicopter, I was standing out on the logs of the Helicopter Pad trying to see as far out as I could. I must say that this Pilot was the bravest guy I have ever met in my life, to fly blind with only me to guide him in by the sound of the helicopter and not run him into the side of the mountain. I told him we had a big fire going but he keep saying he could not see it. I keep talking him in and I keep telling him a could feel the wind from his blade but still, we could not see each other until all of a sudden there he was right on top of me and I was staring at him through his glass window from about 5 feet away, dropping to my back, he put his skids on the logs and I crawled out from under him and we hurriedly loaded all the gear and away we went, all of us giving thanks to our very brave, but foolish pilot, only in Alaska do they have bush pilots like this. 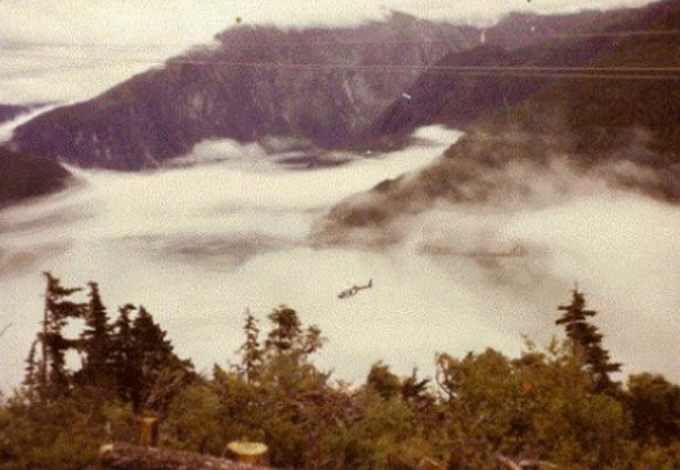 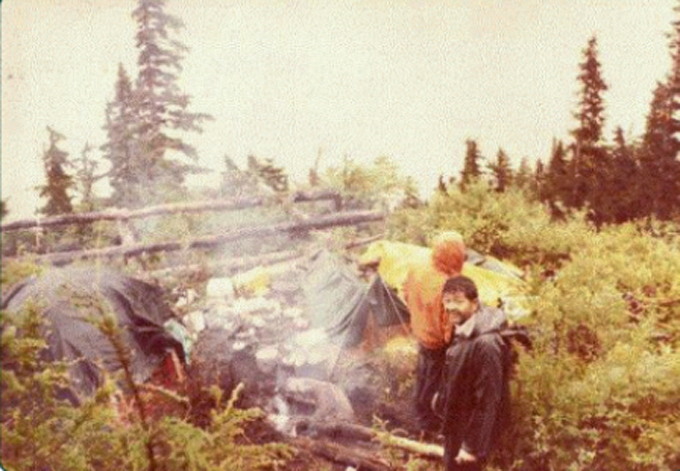 Curt and Albert Gaschler, Dan Cummings behind the camera.
3 / 4 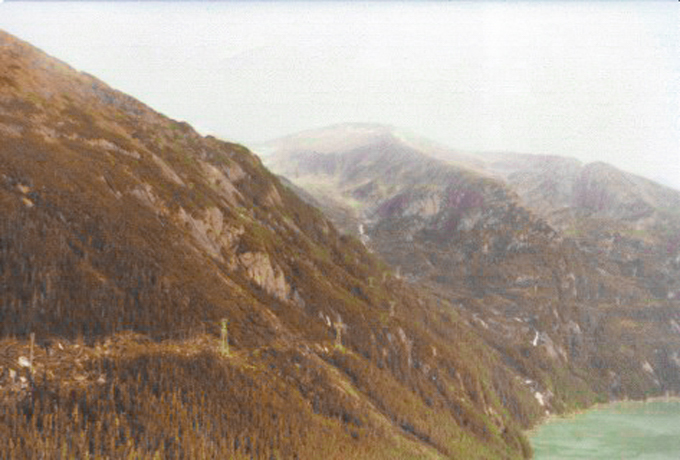